History Alive! Lanesboro’s 2021 Pop-up Play featured the year 1948 and was entitled Lanesboro WW 2 and Beyond. The show involved more than 50 area volunteers and was performed two weekends: September 18 and 19, and September 25 and 26 here in Lanesboro. Total of 8 performances attended by hundreds of residents from the area and other visitors.

The event was free of charge with donations accepted. The opening scenes were held at the Sons of Norway Lodge, 200 Parkway Avenue South, Lanesboro, MN with the walking tour of the downtown leaving there at 1 pm and 3 pm each of the four days. There was a total of seven scenes, mostly outdoors, with masks required for three indoor scenes.  The tour covered four blocks total and the full production lasted approximately 1.5 hours. There was seating in scenes 1 and 5, the Sons of Norway Lodge and the St. Mane Theater respectively. 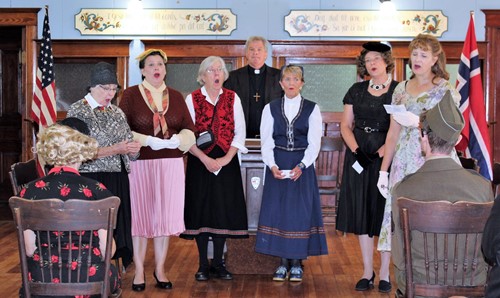 Lanesboro WW 2 and Beyond was the sixth pop-up play by History Alive Lanesboro; each a unique production of a different era of local history. Audience members were surrounded by the 1940’s! The audience moved around our historic S.E. MN town with character guides to outdoor and indoor scenes in locations accurate to the events portrayed.
This unique theater experience featured the tales of many local World War II veterans! After months of oral interviews, Jane Peck’s original script Lanesboro WW 2 and Beyond brought to the stage and streets local accounts of soldiers involved in the D-Day Invasion, German prison of war camps, the Norwegian Resistance, a Japanese nurse in Rochester, and farmers growing food for Europe. Area veterans Orval Amdahl, Don Ward, Bob Earley, Dr. Westrup, Paul Abrahamson, Ruby Nelson, and Signe Soma were portrayed in the production. 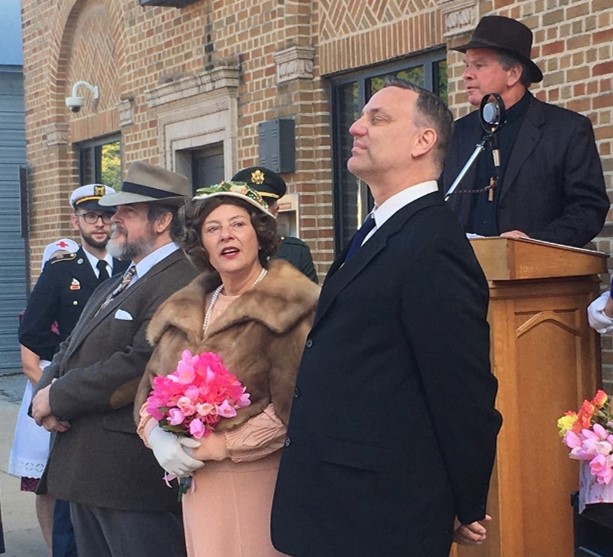 The show also included a recreation of the royal visit of the Norwegian Crown Prince and Princess to Lanesboro in 1939. Live swing music was provided by CBB Jazz band, while other period features included vintage cars, sci-fi hero Buck Rogers, music from the Andrews Sisters, and the Hormel Girls Caravan Orchestra. At the St. Mane Theater audiences were treated to clips from Disney movies featuring the animation talents of local artist Rudy Elstad. The cast included 35 area actors, musicians, and singers, both professional and volunteer.

Jane Peck is the playwright and artistic director who wrote and directed the production. Jane researched and wrote the show with the assistance of the Lanesboro History Museum’s extensive archives of photos, obituaries, and newspapers. Jane interviews many local residents about their memories or their ancestors to gather content for the scripts produced by Hi

*This activity is made possible by the voters of Minnesota through a grant from the Southeast Minnesota Arts Council thanks to a legislative appropriation from the Arts and Cultural Heritage Fund. Many thanks to Lanesboro Area Community Foundation and our individual donors.